Click on the link below to load the audio:

Bill’s latest CD Dog’s Life was released in October of 2015.

It can be heard on many trop rock radio stations and continues in the carefree island life where Aquaholic left off. It is available at all performances as well as CD Baby, iTunes and other popular music sites. Bill also has two new singles, Toasted Coconut Rum and Wave After Wave released in 2016, and are currently only available by download.

CD is available at all of Bill's performances and through CD Baby, iTunes and other online music download sites. 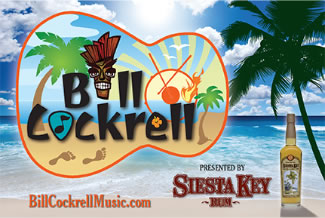 Bill is also proud to announce his latest sponsorship with Siesta Key Rum to go along with his latest single, Toasted Coconut Rum.

"This distillery in Sarasota has set a standard for spiced rums around the world, and has also shown the world that America is producing some rather good rums of it's own" - CJ 2015 Rummy Awards